Dr. Thomas E. Levy is a board certified cardiologist and has written six books on health-related issues. Most of his work has centered on how to restore and maintain good health in the face of the many different forms of toxicity that all of us face, typically on a daily basis. He no longer has a clinical practice of medicine and cardiology. Rather, he limits himself to research and writing at this time, and he is currently working on his seventh book, Death by Calcium: The Supplement that Kills.

LivOn Laboratories was born out of a desperate personal need. In 2002, Les Nachman was diagnosed with heart failure and was urged by his conventional cardiologists to get his affairs in order, because without a heart transplant (a remote possibility), he was going to die.

With an unshakable belief that there was an answer — somewhere in the world — he began a persistent search for a way to heal his heart.

The search led him to two extraordinary MD’s in California. One, a world renowned virologist and epidemiologist, and the other, a maverick cardiologist who had been experimenting with alternative methods of treating sick hearts for a long time. Both doctors were convinced that his damaged heart could be repaired, or at least the progression of the disease could be slowed down or stopped.

The Role of Vitamin C in His Recovery

His new course of therapy included many unusual substances, dietary changes, exercise, etc. All of this ultimately brought him back to life and started his recovery (a process that continues to this day) but the most notable contribution was an introduction to massive doses of vitamin C via intravenous injection (IV).

At first he was put off by the suggestion that something as basic as the vitamin in orange juice could provide any help for his heart. It wasn’t long however, before he began to see the nearly miraculous results.

Intravenous vitamin C therapy three times a week was giving him his life back, but not without some difficulties. It was time-consuming, uncomfortable, expensive, and a 8-hour drive from his home. There had to be a better way to administer the vitamin C.

High-dose was the key for sure, but he was not convinced an IV infusion was the only way to get enough into his system. He tried oral supplementation, but serious gastric distress made this an impossibility. That’s when he knew he had to draw on his 35-year background in the dietary supplement industry and search for a way to get all the results of IV — but from an oral supplement.

Ultimately, a cardiologist introduced him to the concept of “liposome encapsulation technology” (LET). Although the technology had been used by researchers and the pharmaceutical industry since the 1970s, it wasn’t being used for dietary supplements.

Les soon found out why: encapsulating vitamin C was much easier said than done. Every substance requires a unique combination of phospholipids and other ingredients to properly encapsulate it.

After almost two years of trial and error working with scientists, PhD’s, and manufacturers, we finally developed a product that was (and still is) far better than our expectations. We are now convinced, through personal experience, clinical results, and rave reviews, that Lypo-Spheric™ Vitamin C is the most bioavailable, most effective oral vitamin C available anywhere. 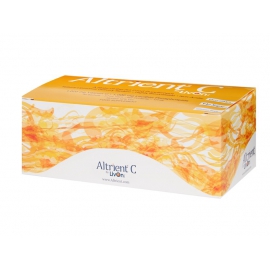